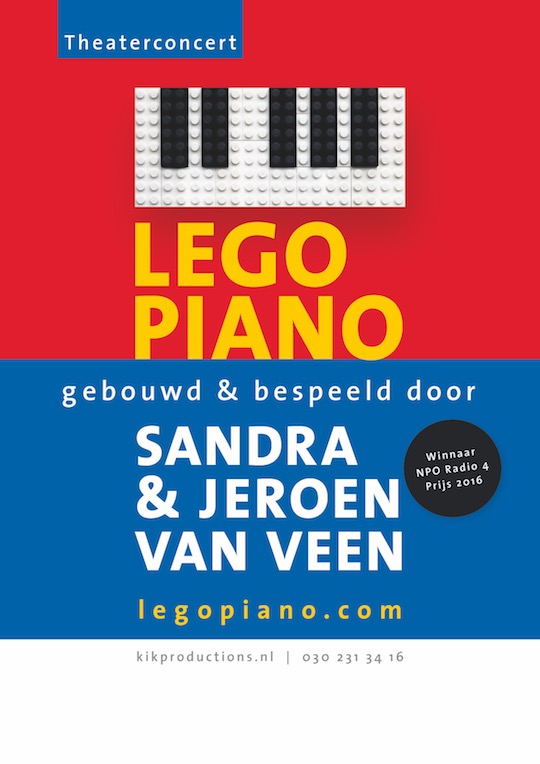 Jeroen van Veen, Winner of the NPORadio4 award in 2016 for his renewing inventions in classical music such as Lie Down Concerts, Twitter Concert build a new piano. The exclusive recording artist for Brilliant Classics with over 160 albums on his name such as: Complete Piano Music by Einaudi, Glass, Ten Holt, Pärt, Satie, JacobTV, Nyman, Tiersen, Van Veen, Yiruma and many other composers, build the first Lego Piano; Van Veen & Sons

Besides composing and performing Van Veen has another passion; Lego building. It started with a challenge with his two sons, Joeri and Fjodor. Debating at the coffee table if it would be possible to create the round shape of a real grand piano into a Lego piano. They found out that the friction between the two bricks is enough to bend the Lego into the rounded piano shape. Sustained by technical Lego the framework holds together. While building the piano they decided not to glue the piano, to make it transportable and use it in shows, and use only second hand Lego bricks. The idea of recycling the Lego that had been used by children for years was exactly the idea of the genius builder. Van Veen started collecting various bricks and the whole proces of building took him two and a half year. Only a small draft was used, pretty much the whole piano was in his head when he started. At first he wanted to create the keys out of lego, but the mechanics was not accurate enough so he decided to use a master keyboard instead. On top of the piano Van Veen build modules which contain percussion instruments such as bells, rainmaker and a rattle. From time to time his two adult sons Joeri and Fjodor helped Jeroen Van Veen out in difficult situations. Many problems had to be solved to make this piano stable and movable! The result is a Grand Piano with almost 30.000 bricks named 'Van Veen & Sons". Van Veen is using the piano in his concerts; one of his programs is called Lego Piano, of course with his Lego Music, (his collection minimal preludes). The Lego Piano has a strong educational intention: showing the development of the piano through history; from clavichord, pianoforte to piano as we know it today, but also includes prepared pianos, and new piano sounds. Van Veen says "I hope to reach a new audience with this piano'.